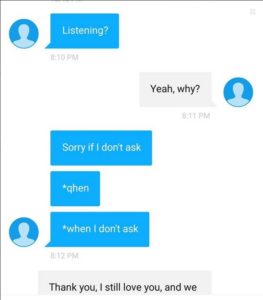 I was meeting students after the “Can I Kiss You?” program at Bishop’s University, a student came up to me and asked, “Can I show you my phone?”

She showed me a text from her boyfriend – who was also in the audience attending the “Can I Kiss You?” program. They were sitting with their residence halls and so not able to be next to each other.

The text started as the boyfriend saying, “Sorry if I don’t ask” and then correcting himself to say, “Sorry when I don’t ask.”

Her response is wonderful. While some partners might have responded with, “No big deal” or “Don’t worry about it” – in order avoid making the other person feel bad, she didn’t do that. She said, “Thank you.” In those 2 words, she showed appreciation for him recognizing the importance of asking first.

She reinforced the messaging and importance of asking first!

Why did she want to show me? She said she wanted to make sure I knew the difference I had already caused in the room – the positive impact “Can I Kiss You?” was already having on their relationship.

The reality is “I” didn’t cause that positive behavioral change in her boyfriend or her relationship. Her boyfriend being willing to look at himself, evaluate his beliefs, and reconsider his past choices is what lead to that moment of discovery. “Can I Kiss You?” simply provided him with the tools to do so.

Her text back to him saying, “Thank you, I still love you,…” is what will continue to reinforce the importance of asking first in their relationship. Imagine if she had said, “Don’t worry about it. Its not big deal that you don’t ask.” Then he might have disregarded the discovery he was having during the program. Instead, his choice was reinforced.

Sometimes other speakers and educators will question the choice of encouraging texting and tweeting during educational programs. The answer for me is simple: you don’t create an opportunity for global transformation by only speaking to the people whom are present in the room you are speaking in. You create massive opportunity for behavioral change by enabling and encouraging others to REACH OUT. By doing so, students, parents, and military members in our audiences can spread the message to thousands more beyond the walls of a single theater or auditorium.

What message will you tweet or text to someone today that could have a long-term impact on their life?