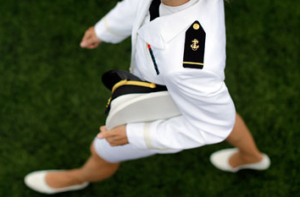 Over the past few years, the military has been working diligently to address sexual assault within their forces.

To reduce sexual assault, survivors must feel safer and and more supported in coming forward to report a sexual assault. The more predators and rapists are dealt severe consequences, the more everyone will believe that sexual assault in the military will not be tolerated.

Currently, a pretrial hearing is taking place concerning a sexual assault case at the United States Naval Academy that is exposing an obstacle to survivors coming forward within the military judicial system (click here to read the full story).

The ONLY FOCUS of such a pre-trial hearing should be establishing if consent was requested and fully given at a time when the person was able to consent (of legal age, of sound mind, etc…), especially in this case where the defendants bragged on social media about having sex with the survivor (there is no argument that the sexual acts did not happen). In this case, the focus of the trial should be focused on the ability of the female to give consent. Was the female in this case intoxicated?

If the survivor was not of sound mind due to alcohol consumption, she was NOT be able to give consent.

Like many people who are dedicated to helping reduce sexual violence, one of the most disappointing and reoccurring aspects of our work is seeing perpetrators and predators go free in cases where their survivors were clearly drunk and thus unable to give consent. How is the perpetrator not found guilty? By the ridiculous and legally implausible argument that the survivor “would have given consent if he/she was sober.” Even if you were to believe such nonsense, you can’t prove it. EVER!

In such cases, here is what you do know and is legally accurate: a PERSON WHO IS DRUNK CAN NOT GIVE CONSENT. If consent cannot be given and a person sexually touches that person, a sexual assault has taken place. End of case.

While many positive strives have taken place in the military’s efforts to address sexual assault, to educator the troops, and to provide survivors with legal teams who are dedicated to sexual crimes, the next paradigm shift needed is how attorneys are allowed to question the individuals involved. Yes, the judicial process demands tough questions to be asked of both parties. At the same time, RESPECT and relevancy should also be honored throughout the process.

If a paradigm shift protecting survivors from irrelevant questions (questions designed to degrade) does not take place, survivors are going to continue to witness other survivors be treated unfairly. The long-term impact will be less survivors will come forward and thus sexual predators and rapists in the military will continue to do harm without facing consequences.

Please speak out to help the paradigm shift begin. Contact your representatives in the House of Representatives and in the Senate to write legislation properly protecting survivors who come forward in the military judicial system.